Where Have All The Pickups Gone?

The last year or so has seen big changes in the pickup market with leading manufacturers dropping out of the truck sector in the UK.

What do Mercedes-Benz, Nissan, Mitsubishi, Volkswagen and Fiat have in common? They have all either stopped manufacturing pickups, or have just withdrawn from the UK. Whilst the decision by Mercedes-Benz was perhaps less of a surprise, the premium X-Class (derived from the Nissan Navara) not achieving the sales volumes anticipated due to its price tag, more of a shock was the loss of the Nissan Navara and Mitsubishi L200, big sellers with a loyal customer base. Reasons for the withdrawals were varied and in some cases complex, but, the upshot is that there are far fewer pickups to choose from.

There are currently just four mainstream suppliers of pickups who are no doubt competing fiercely for those customers who can no longer buy the truck they’ve been accustomed to. Let’s take a look at what they are currently offering...

It’s often the only pickup to feature in the top 10 monthly registration figures and, as a result is the best selling pickup in the UK. Ford regularly update the truck to maintain a competitive edge, the last major upgrade taking place in 2019 with some additional changes in 2021.

Ranger is available in a wide range of body configurations and trim levels. The familiar double cab is joined by a super cab (a bit of a halfway house) and a single cab, for those whose priority is load carrying capability rather than passengers.

There’s a specification level for all requirements and budgets, from the basic, workhorse XL model, through to the XLT, Limited, Wildtrak and the high spec MS-RT models. There’s also the Raptor, a more thoroughbred animal which excels at on and off road performance, but with its payload being below 1000kgs there are unwelcome taxation implications which restrict its appeal to some.

All current Rangers are powered by a 2.0 litre ‘EcoBlue’ diesel engine, offered in outputs of 130PS, 170PS and 213PS. The 6-speed manual or 10-speed automatic gearboxes are coupled to Ranger’s standard four wheel drive system.

Coming soon however is an all new Ranger. It’s a product of the agreement between Ford and Volkswagen to jointly develop a range of new commercial vehicles. The new front grill, inspired by the American F-150 truck offers a bold statement, and the wider wheelarches give the truck greater ‘presence’ on the road.

There’s no electric option, but for those who like their power units on the larger side, new Ranger won’t disappoint with the availability of a 3.0 litre V6 diesel unit. The new Raptor goes one step further with a 288PS twin turbo V6 petrol power unit, one definitely for the enthusiast.

New Ranger will be in the showrooms in early 2023, but expect to see Raptor in the summer of 2022.

The Toyota has been around for decades and to many is the archetypical pickup truck. 2021 saw the introduction of the latest incarnation, and one which addressed a major issue that has held back its popularity in recent years.

The most common criticism of the Hi-Lux has been its lack of engine choice, the only option being a 150hp diesel unit, not considered powerful enough by many potential customers. The update sees the introduction of a 204hp engine which also provides the driver with a huge 500nm of torque, something which will benefit those working in arduous conditions, with a heavy load and possibly towing a 3500kg trailer. For those who don’t need that extra ‘ooomph’, the lower output engine remains available.

New Hi-Lux sports the now almost mandatory large, hexagonal grill, and like the Ranger, you’ve a choice of three body types. Trim levels span from the Active, through to the Icon, Invincible and the pretty luxurious Invincible X.

Many Hi-Lux owners opt to fit a nice hardtop to the load area which protects loads from inclement weather and increases security. It’s important to remember that for taxation purposes, the payload of the truck must remain over 1000kgs with the hardtop fitted for the pickup to be considered as a commercial vehicle. VAT registered businesses will not normally be able to reclaim the VAT on the purchase price or lease rentals if the figure is below the magic metric tonne.

The introduction of the original D-Max in 2012 caught the competition off guard, the truck quickly proving very popular with those in the agricultural community in particular, who are often catered for by dealers who adopted the franchise as a secondary business alongside operations such as farm machinery sales.

The UK importers are taking advantage of the departure of Mitsubishi and Nissan in particular who previously also had success in this market sector. Helped by the introduction recently of a heavily revised D-Max, at the time of writing demand is exceeding supply and customers are being placed on a waiting list.

The main issue that prospective customers have had to face is that the truck is only available with a 1.9 litre, 164PS engine. The modern trend for engines to become smaller but more efficient is troublesome to some of the old guard who are unwilling to look past pure cubic capacity. On paper though, with a top speed of 112mph and a 0-60mph time of 12.7 seconds, the D-Max is no slouch.

Split into three ranges, intended to appeal to different customer profiles, Isuzu have a truck for every application. The Business range is more workhorse orientated with its single Utility specification. Next up, All –Purpose is the mid range offering, badged as either DL20 or DL40, and the range topping Adventure series is covered by the V-Cross with its bling and high specification level. 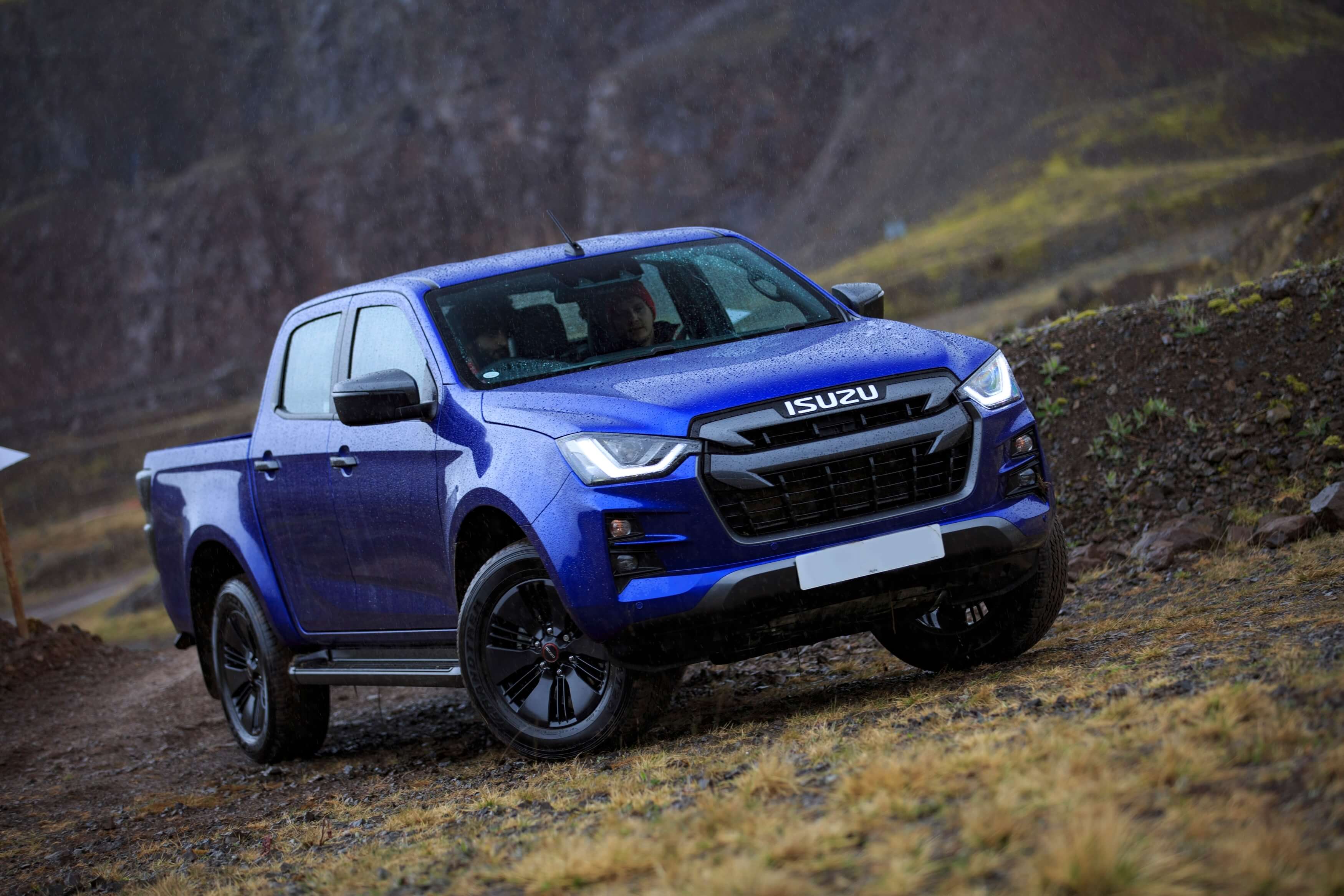 One that might not immediately come to mind and take its place on the shopping list, the Musso is often overlooked but is definitely worthy of consideration. Manufactured in Korea, the Musso rarely receives a bad review by industry press and a recent makeover makes it an even more attractive proposition.

The Ssangyong differs from its competitors in that it is only available in double cab form but is unique in being offered in two wheelbases. The Musso Rhino has the longest loadbed of any double cab pickup currently on the market, the 1610mm eclipsing its nearest rival, the Ford Ranger which has a bed 1549mm in length.

The 2.2 litre 181PS diesel engine provides enough power for the vast majority of pickup operators, and it can be coupled to either an automatic or manual gearbox. If you’re thinking of using the truck to tow, bear in mind that the Musso with a manual gearbox can only tow 3200kgs, whereas the auto has a 3500kg towing capacity.

There are four levels of trim, starting at the basic EX. Mid range offerings are the Rebel and Saracen, and the range topping Rhino is only available in long wheelbase form.

Yes, we’ve already said that VW are out of the UK pickup market at present but, not for much longer. The Amarok will return, looking surprisingly similar to the forthcoming Ford Ranger due to the joint venture between the two companies. Watch this space...

Insuring your caravan or trailer