People who like what they do, do it better – that’s our philosophy. We make sure we have an open and inclusive workplace, where people can have fun, work hard, and be rewarded for their achievements.

And this must be true, as we don’t just have award-winning products – we’re also an award-winning workplace. Take this year as an example. Not only were we named the fourth best super large workplace (1,000+ employees) in the UK by the Great Place to Work Institute, we also got a Lifetime Masters award.

We’re one of just two companies to get the Lifetime Masters award, which recognises organisations who have been named in the list every year since it was launched 20 years ago.

And on top of that, we were also named a Centre of Excellence in Wellbeing by the institute, in January, for our focus on wellbeing in the workplace. 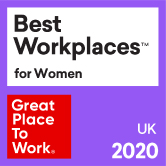 These are just a few of our awards

A brief history of Admiral

Here are some of the stand-out moments since we started in  1993.

END_OF_DOCUMENT_TOKEN_TO_BE_REPLACED

Find out a little more about what we stand  for.

END_OF_DOCUMENT_TOKEN_TO_BE_REPLACED

Here’s how we gave back to our customers during the Coronavirus lockdown.

END_OF_DOCUMENT_TOKEN_TO_BE_REPLACED

Community is important to us and we’re involved with a host of different initiatives and events – both big and small.

END_OF_DOCUMENT_TOKEN_TO_BE_REPLACED

We've come a long way, from start-up to delivering award-winning products and services.