How to insulate a van

Admiral has some top tips on how to insulate your van or campervan, to keep it toasty and warm even on the coldest of nights, and stop it overheating on hot days.

Keeping your van or campervan well insulated is not only a real lifesaver on cold nights while out camping, but it’ll stop it getting too hot on sweltering summer days. It also has other benefits, like reducing condensation (if installed correctly) and acting as a sound barrier.

Do we recommend van insulation? Hell yeah! So let’s see how to go about doing so. 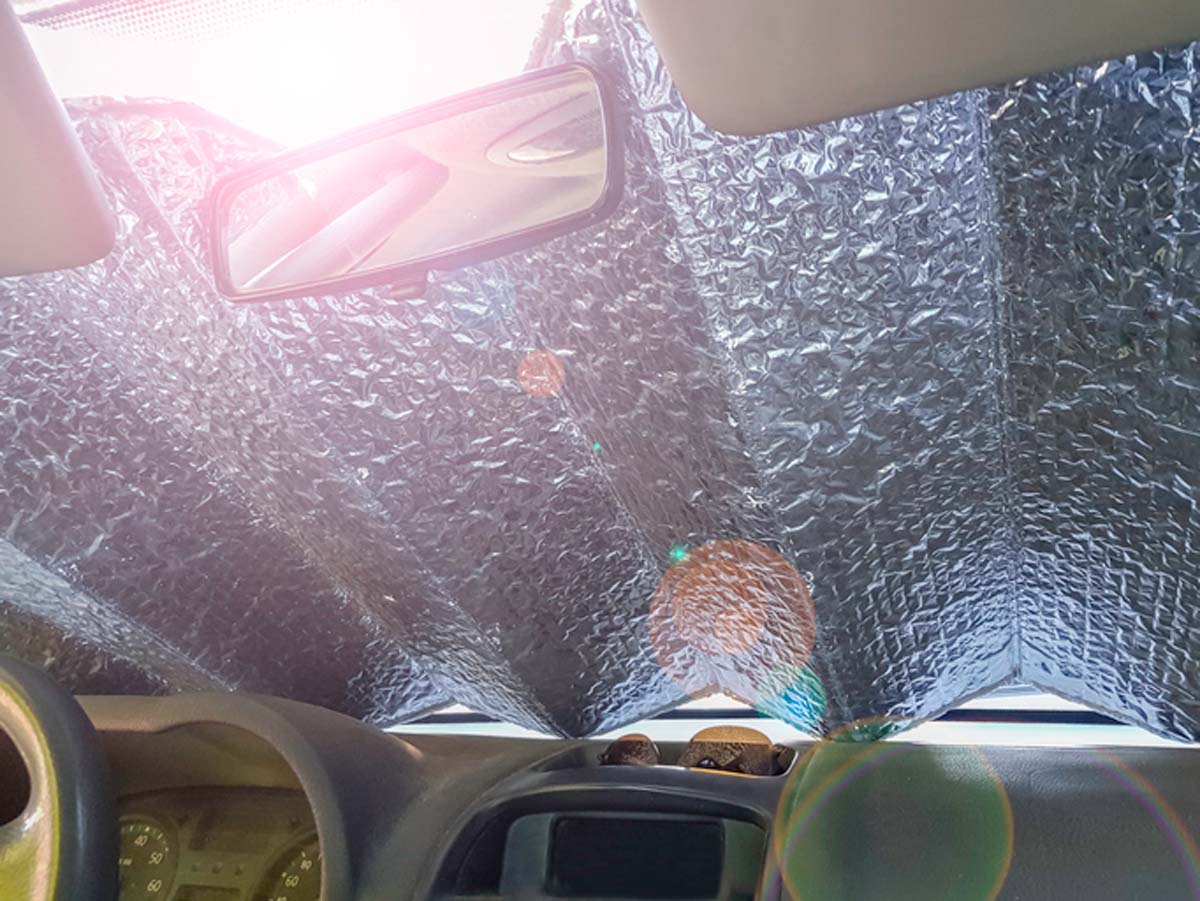 If you’ve got a passenger van or purpose-built campervan, the chances are you’ve already got decent insulation built in. However, these can still be vulnerable to extremes of temperature via the windows. So it’s a good idea to have removable insulation for your windows - whatever the type of van.

As luck would have it, window insulation mats are a quick and dirty way to help control the inside temperature.

By far the best type of insulation to use for windows is a reflective foil mat. You might hear these called a range of things, such as thermal insulation foil, brand names such as ThermaWrap or Reflectix, or sometimes space mats. They’re usually thin rolls of foil filled with bubbles (like bubble wrap) or microfibre, and are lightweight and energy efficient.

Ideally get reversible ones with one reflective side and one dull side. The former will reflect light and heat, the latter will absorb it.

If your van is a fairly common make or model, then you can most likely pick up ready-made mats for your windows from campervan stores. These will be cut to your windows’ shapes and sizes, and just sucker straight on. Couldn’t be simpler. We’d particularly recommended one for your windscreen. These can be fiddly to make yourself - especially making allowances for the rearview mirror.

That said, it’s still pretty low hassle to make your own. You can buy the thermal insulation in rolls, measure your windows to make templates, and cut it to size. Then attach to your windows with suckers. Alternatively, you could attach it with foil tape around the edges. Though this looks a bit more rough and ready, it’s good for ensuring no cracks of light get in if you like to sleep in total darkness.

You might be surprised just how much difference simply covering the windows overnight makes, both in terms of shutting out light and keeping in heat. It should save you from waking up chattering, and instead secure you a really warm night’s sleep.

If it’s cold but sunny, you can trap in the day’s heat by leaving suntrap windows uncovered, but putting pads on the windows in the shade.

On the other hand, the reflective surfaces can keep your van from becoming an oven when it’s particularly hot.

Getting fully stuck in with your van’s panels and ceiling

If you’ve got a cargo van, or are converting one into a camper van, then it’s time to go full DIY.

While there’s consensus about the best way to insulate your windows, opinions vary on how best to fully insulate a van. There’s inevitably going to be certain trade-offs depending on how much you want to spend, and how much room within the van you’re able to sacrifice.

We recommend researching thoroughly before committing to an action plan, but we can give you some rules of thumb.

Although some people recommend only using the foil roll mentioned above for the entire van, this is actually pretty inefficient. It might be tempting to do so as it’s thin, but it’s a radiant barrier. It can’t defend against radiant heat if it’s pressed against a metal surface - it’ll just act as a conductor.

It’s better to use more heavy-duty insulation for the panels, which you sandwich in the gap between the metal and the plywood if your van is boarded out. If it’s not, it’s a good idea to do it at some point, as plywood will bolster your panels and protect your metalwork.

Of the experts we spoke to, the most popular choice of insulation is polyisocyanurate (commonly referred to as polyiso). This is a rigid foam board, manufactured by Kingspan and Celotex among others. It’s comparatively inexpensive, and easy to cut into shape. It also tends to come with foil on one side, which ticks the moisture barrier box.

It’s best to make sure that the insulation board and the outside metal panel don’t touch.  Ideally there should be a gap of about ¾” (2cm) between the panel and the board. This should stop any condensation from gathering. The cavity will offer greater thermal resistance, and actually means that the insulation itself needn’t be as thick.

You can glue the board to the van’s body with spray foam or spray adhesive, then fill the gaps with spray foam. There’s bound to be a bit of compression when you squish the plywood back on, so try to allow for this.

As heat rises, it’s also wise to insulate the ceiling. By and large you’d do this with the same materials you’d use for the panels, but you may want to reconsider if you’re losing too much height.

Insulating the van roof and floor 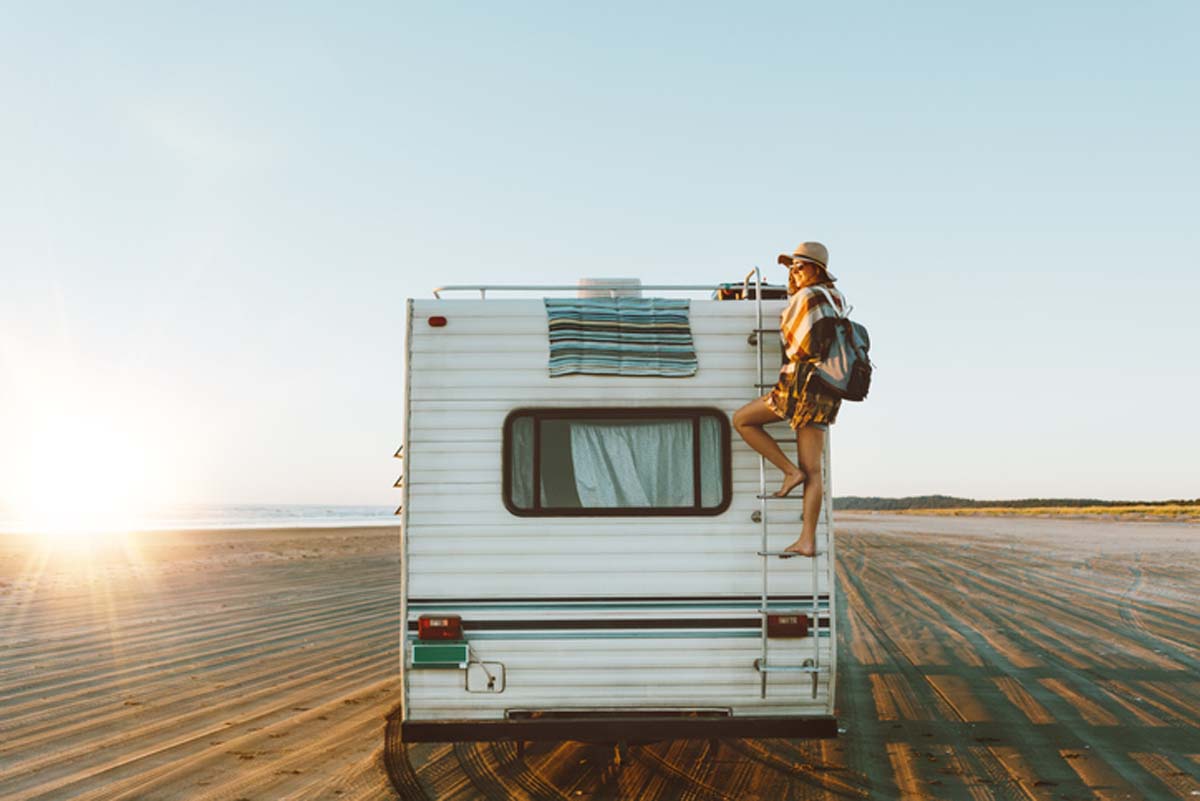 If you’re going for the whole hog, you can also insulate your floor.

If you’ve bought a van second-hand, it’s likely that it’s previously been used for lugging tools and equipment. As such, there are probably scrapes and scratches on the floor. Before installing any insulation, give it a good sweep, and a layer of paint to seal it.

You probably don’t want to lose too much height, so insulating the floor with a space mat or a layer of carpet should be sufficient if you don’t want to go all out.

Converting your van into a campervan

Get your campervan ready for winter