Car clocking on the rise in UK

Winding back a car's mileage - or 'clocking' as it's commonly known - was very common 20-years-ago but it’s on the rise again in the UK.

Used car buyers are more likely than ever to fall victim to buying a motor with doctored mileage, costing motorists more than £800m a year by paying over the odds for the car.

Car clocking has been making headlines again in the UK with recent figures from Cap HPI revealing a 30% jump in the last five years.

A strange loophole in the UK means the act of altering a car's odometer isn't illegal, but knowingly selling a clocked car is.

Why do people clock cars?

Clocking is often carried out in a bid to boost the sale price of a vehicle, sometimes adding thousands of pounds to the asking price.

In the '90s it was big business to physically roll back the clock but this has been replaced by easily-accessible computer technology which rolls back the digital displays in today's cars, arguably making it far easier for the dodgy practice to occur.

For people with cars on finance, clocking the miles is a way to avoid the big pence-per-mile charges associated with going over your agreed mileage at point of sale.

And HPI’s head of industry relations, Barry Shorto, agrees the latest rise in clocked cars could be linked to the growth of PCP finance deals and their strict mileage limits.

“Clocking and mileage fraud is a problem that refuses to go away and continues to get worse. The increase in mileage-related finance arrangements such as PCP and PCH may also be a contributing factor as motorists look to avoid costly penalties for exceeding mileage allowances,” he said.

An EU ban on companies offering mileage correction services was supposed to come into play in May 2018, but it never happened. The Local Government Association (LGA) – which represents the 370 councils in Wales and England – is calling for the legislation to be put in place and retained under UK law after Brexit.

The LGA’s Councillor Simon Blackburn said: “Trading Standards teams across the country often receive more complaints about used cars than anything else.

“This is why the proposed EU ban on mileage correction services needs to be made part of UK law as soon as possible, otherwise thousands more cars will continue to be clocked, jeopardising the safety of cars and passengers on UK roads.”

What are the dangers of car clocking? 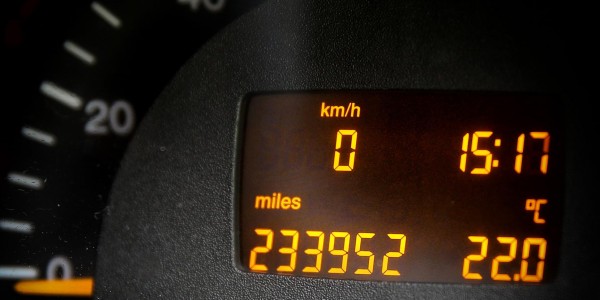 Unless a skilled 'clocker' is doing the work, it's easy to be caught out; HPI says around 10% of all the modules in a modern car, such as the airbag, ABS and ignition, feed information into the central ECU system.

Each time an event occurs – such as a faulty airbag warning – a ‘snapshot’ of the vehicle’s mileage will be recorded on these modules.

So unless a vehicle’s mileage is wound back by a particularly diligent and clocker who knows to alter the mileage readings on all modules as well as the odometer, these will be out of sync. This will lead to issues with safety warnings – making it dangerous for the driver.

Neil Hodson, deputy managing director for cap hpi, said: “Clocking is a blight on the used car industry. It’s a fast and easy way for unscrupulous sellers to make money, with many simply thinking ‘why not?’.  But here is a perfect example of why not – serious problems can occur with a vehicle.

"Firstly, there is the potential to miss important servicing and warning light indicators, as the car’s various different components will be reading different mileages.

“By changing the mileage, a clocker will actually be causing conflicts within the car’s electronics and interfering with the normal routines for servicing and repair. In addition, the manufacturer’s warranty is likely to be void if the car is discovered to have been clocked.

"There’s also a very serious legal issue to be considered. In modern vehicles, crucial evidence of a car's performance and speed at the time of an accident will be stored in the car's on-board computer.

“Such evidence may have an important contribution to make in an accident investigation, but sadly if a vehicle has had its mileage tampered with, the integrity of the data could have been compromised and will likely be inadmissible as evidence in court.

"An innocent party in an accident could find themselves unable to prove this if they had been driving a clocked car without realising."

Warning signs of a clocked car

Reliable car brands which hide their age well are often common targets for clocking, as well as high-mileage ex-company cars and cars bought on lease.

While it's difficult to spot in modern cars with digital technology, there are a few warning signs to keep an eye out for:

Before buying a used car you can get an online history check which will confirm the car's mileage against the National Mileage Register.

What do I need to tell my car insurance company?