How to load a van safely

As a van user, loading and unloading your vehicle is something you’re likely to do day in and day out, depending on your operation. You’ll probably give little thought to it, it’s almost second nature.

But is there a better, more efficient way to get that payload on and off your vehicle? Are you doing it safely or maybe unwittingly allowing your employees to put their health in jeopardy?

Here are our tips for loading and unloading your van safely, starting with…

The right van for the job

This may be one for future reference, but when thinking about buying a new vehicle there are some considerations that could make the day job a whole lot easier.

If you’re carrying pallets, make sure the side door is wide enough to take one, otherwise they’ll all have to go through the back. If you regularly reverse up to a loading bay, make sure the rear doors fold back against the van sides. Damage is far less likely that way.

And don’t make the mistake of ordering a van with a rear tailgate. Fork trucks don’t like them…

Carry lots of uniformly square packages? (Yes, we’re thinking boxes!) If so, it might be worth considering a box or Luton van.

Advantages? No wheel arch intrusion, so you’ve a flat floor, straight sides, and a nice big rear door. You’ll get more boxes in but beware the pitfall of overloading from a weight perspective. It’s easy to do.

Not a cheap option, but how else can you safely unload a customer’s new washing machine at the roadside? They’re not necessary for most van users but those involved in carrying heavy items in a Luton van should seriously consider one.

Now standard on the majority of new vans and a vital safety feature. If you’re carrying heavy loads which could move in an accident, a substantial, steel structure is required to avoid injury to the driver or passengers.

Some bulkheads have multi functionality, allowing long loads to protrude through under the passenger seat.

Getting the load in (and out again)

Sounds simple? It often is but a bit of thought can ease the day along nicely. 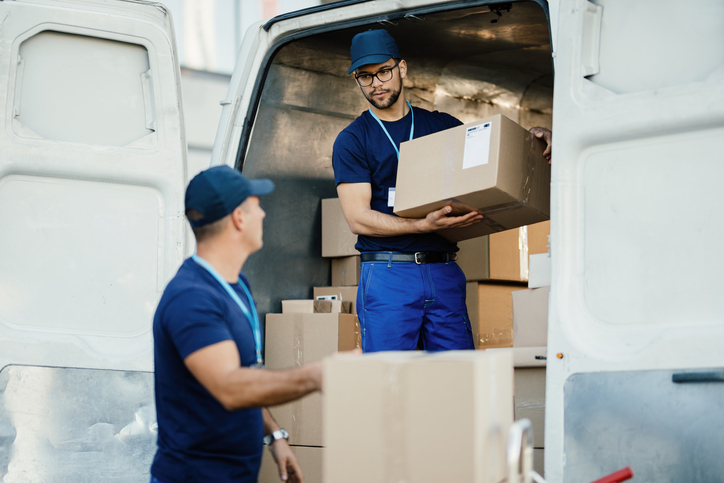 Securing the load is probably the single most important aspect when operating a commercial vehicle. It’s the driver’s responsibility to make sure the load doesn’t pose a threat to anyone including passengers and any third party.

Depending on the nature of the load, different equipment and techniques can be used to make sure the payload stays in place:

Not only will securing the load properly prevent it getting damaged, it’ll also ensure the van itself doesn’t sustain any knocks or bumps. Ply lining is great, but it won’t stop a tonne weight which has started to slide under heavy cornering…

Much of the above also applies to light commercial vehicles with an open back but there are also one or two extra things to consider.

You’d have to be really going some to strike a railway bridge with a load on a light truck, but if you’re heading to a destination with a low height restriction (car park etc) it’s worth checking you can access the drop off point without being involved in an unfortunate and embarrassing incident – even if it’s somewhere that doesn’t usually pose a problem.

Carrying a load that’s susceptible to water damage? Ensure it’s protected by a high-quality cover and the tarpaulin is well secured and won’t blow away at 60mph on the motorway.

Weather can also affect load weight. Consider this: you’ve loaded your tipper with over one tonne of sand. It’s as much as the truck can legally carry. You’ve parked it overnight ready for the morning’s drop. There’s been a rainstorm overnight and now the sand is saturated. With water. Which is heavy…