British motorists are more eco-conscious than ever before

Admiral conducted a survey to find out how British drivers feel about green issues – and whether electric and hybrid cars are becoming more popular. Take a look at what we found

Whether it’s David Attenborough highlighting the dangerous levels of plastic in the world’s oceans or increasing amounts of people pledging to minimise waste, green issues are an important issue and something people across the world and the UK are taking more and more seriously.

That’s why we’ve launched our campaign to promote eco-conscious motoring, which includes our eco-friendly car comparison tool and green FAQ hub. As part of the campaign we spoke to 2,000 British drivers about green issues and to find out whether electric and hybrid cars are becoming more popular.

Here’s what we found:

Forty six per cent of drivers are concerned their car is doing damage to the environment, while 1 in ten are very concerned. 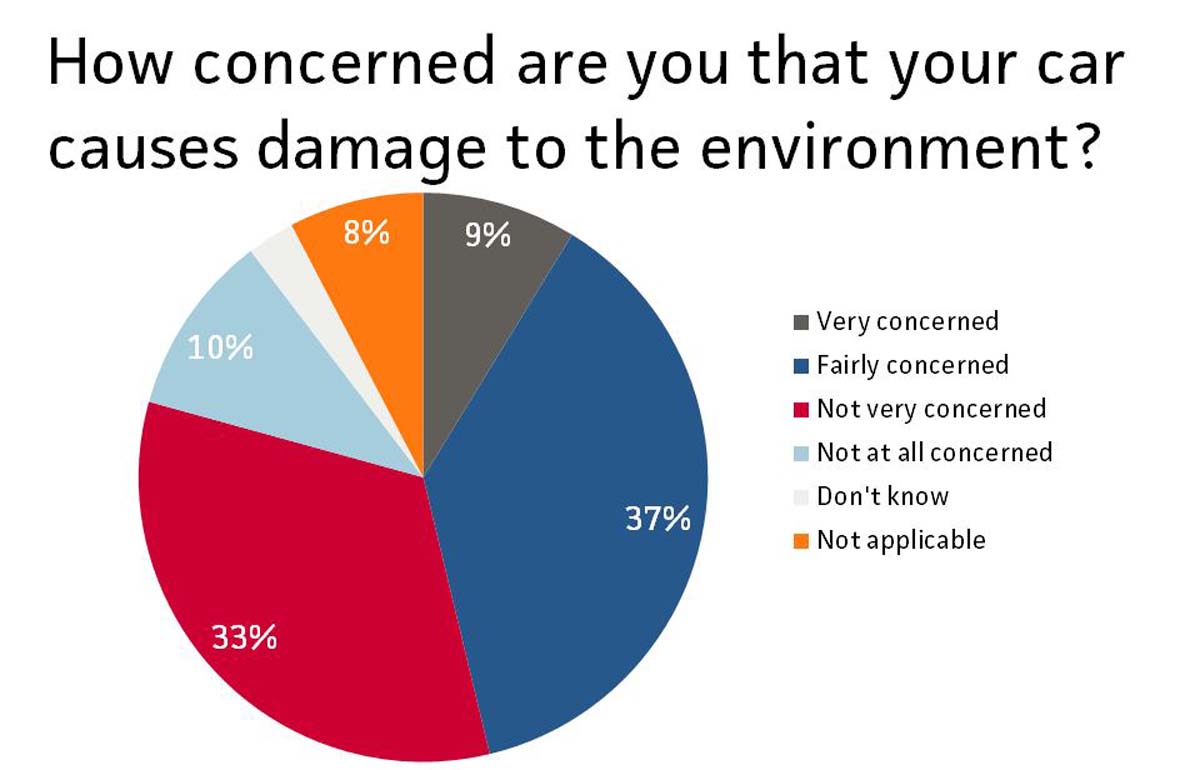 Women were slightly more eco-conscious than men, with half of all females surveyed concerned or very concerned, compared to 42% of men. Interestingly, there was no contrast between the generations , with all age ranges reporting a ‘concern rate’ of between 45-47%.

Drivers in the north east are most conscious of green driving issues, with 56% concerned or very concerned, compared to just 40% in London. 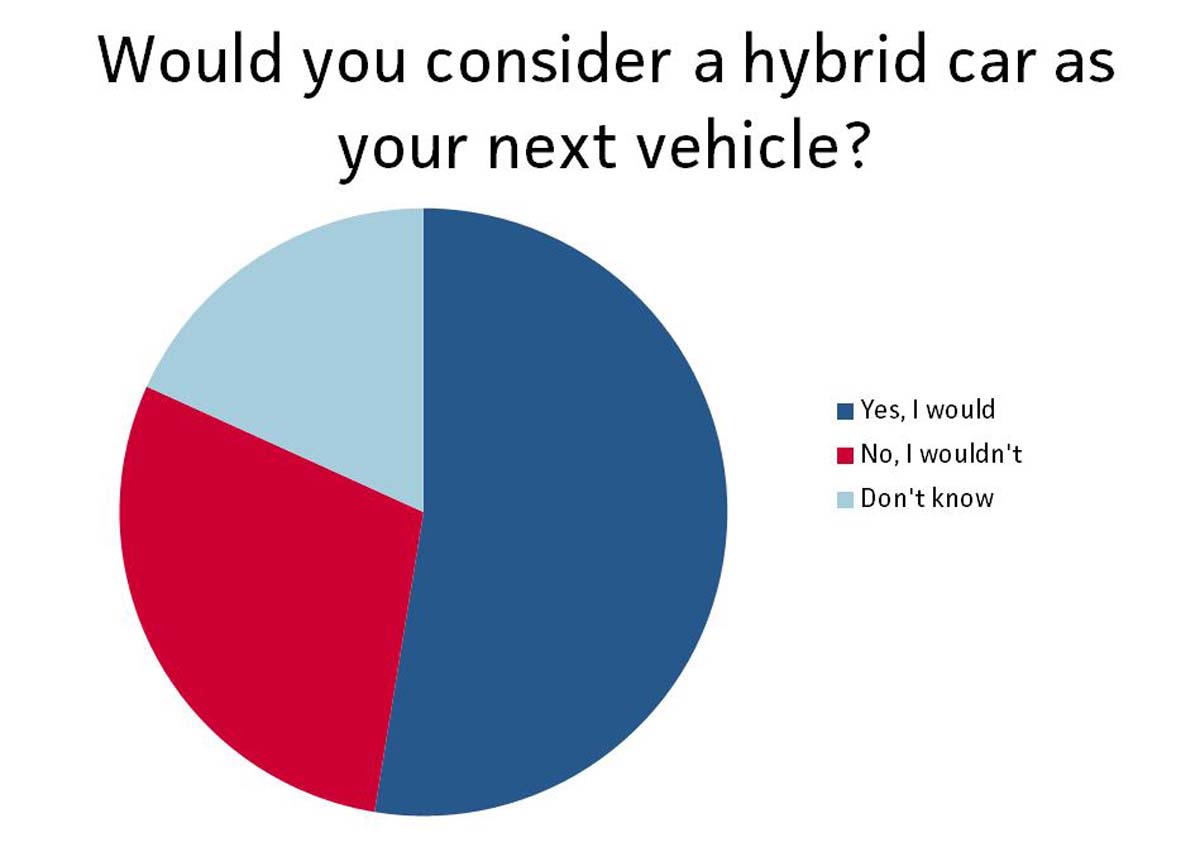 Hybrid models have risen in popularity in recent years, and we saw that trend confirmed in our study. 53% of those surveyed said that they would consider a hybrid car such as a Toyota Prius or Lexus NX for their next purchase.

Young people were the most likely to want a hybrid car, with 62% of 18-24s considering one for their next vehicle, compared to 48% of those aged 55+ – while 65% of students said they would consider one. It’s clear that the younger generations are on board with more eco-friendly designs. 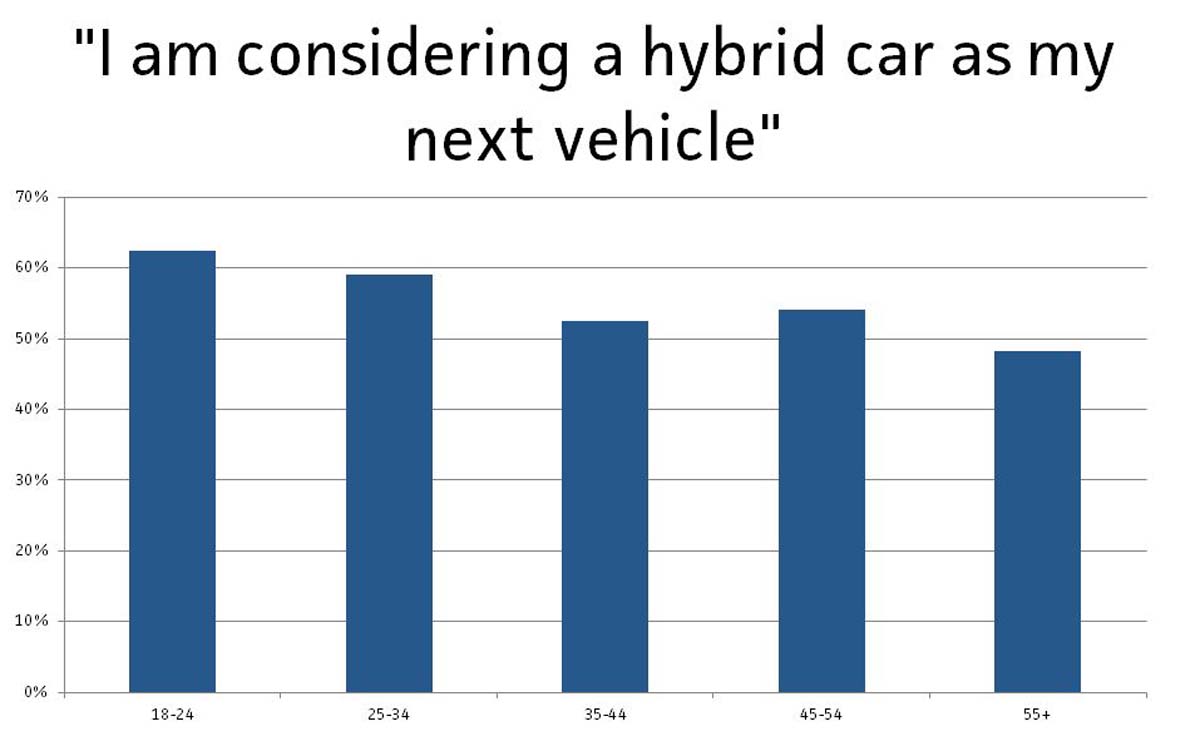 Senior professionals in the south east are leading the hybrid charge

While our survey showed that the average Londoner is less conscious about green issues than the rest of the country, London and the south east of are actually leading the UK when it comes to hybrid ownership.

Admiral data shows that 57% of all hybrid and electric car insurance quotes come from London and the south east. 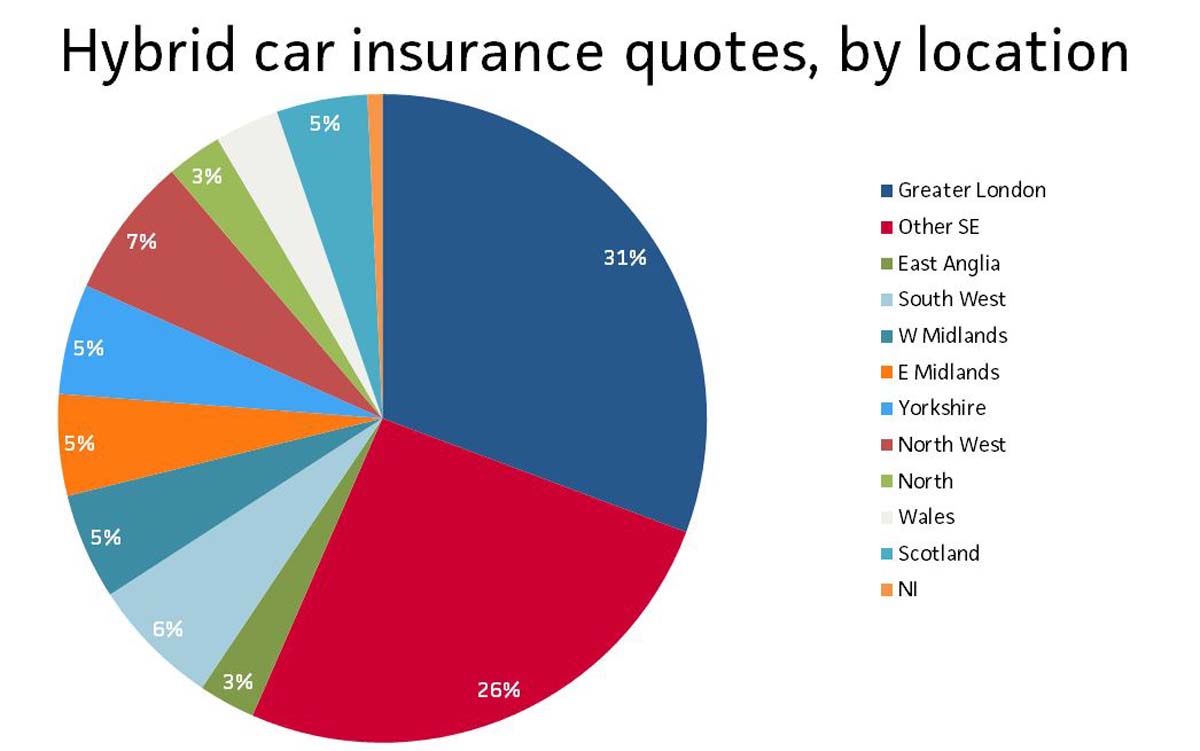 Leading the charge for electric and hybrid cars were senior professionals (who accounted for 16% of all hybrid quotes) and retirees (8.5%).

Young people may be more interested in green issues, and more likely to want a hybrid car, but because eco-friendly cars are still on average more expensive than traditional models, they’re still owned predominantly by those with more disposable income, in more well-off areas. As more hybrid models enter the market and bring prices down in coming years, we anticipate this trend weakening.

Attitudes to eco-friendly cars are changing

We compared our survey findings alongside a very similar survey we conducted five years ago, and found that British motorists are more eco-conscious than ever before. 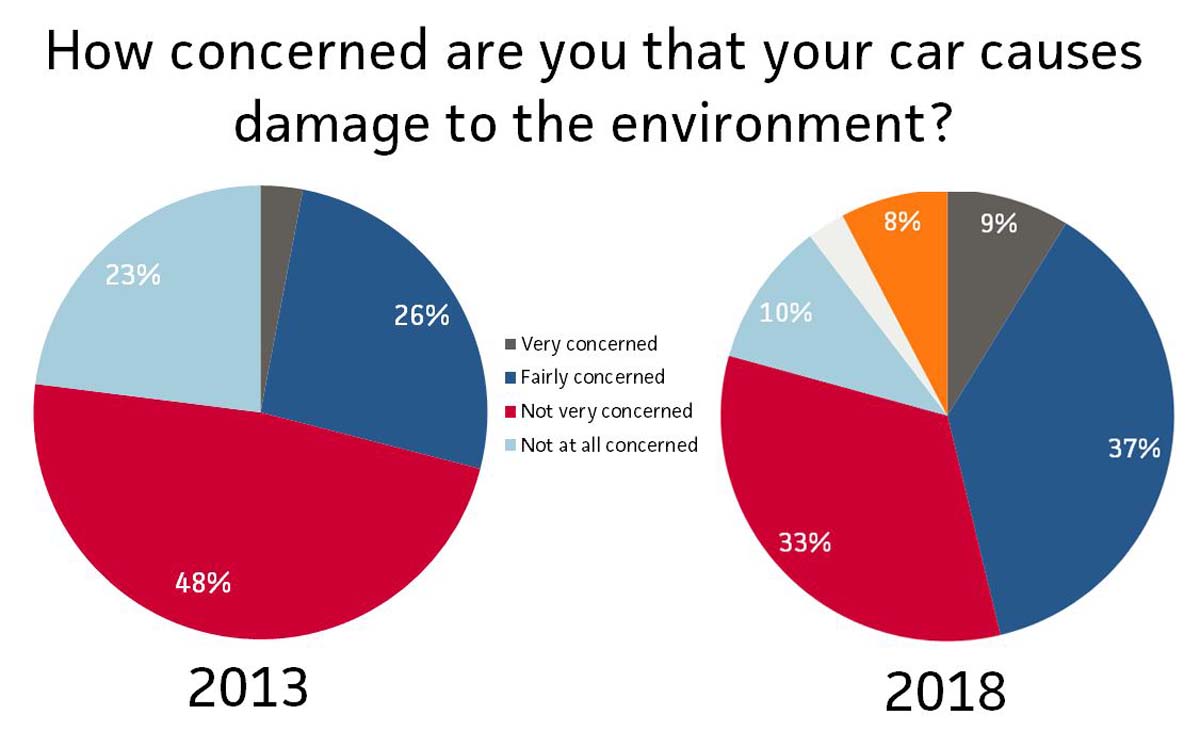 That interest has also manifested itself in the business data we’re privy to. Our data found that enquiries for electric cars rose 1,480% in the last seven years, while hybrid car enquiries grew 243%.

Our survey showed that the public mood may be shifting on hybrid and electric cars, but electric models still have further to go to reach mainstream acceptance. Nearly half (46%) of people had ruled out an electric car such as a Nissan Leaf or Renault Twizy as their next purchase.

The cheapest new electric cars start at around £15,000, so it’s not surprising to see that respondents’ biggest problem with electric cars is their cost. Other significant barriers were the long charging times (48% of those surveyed) and the relatively small amount of choice for consumers (34%).

Just 1% said that peer pressure would dissuade them from buying an electric car. It’s clear that there’s still much progress to be made in order to make eco-friendly cars a major part of the motoring conversation, but drivers’ perceptions are certainly changing. 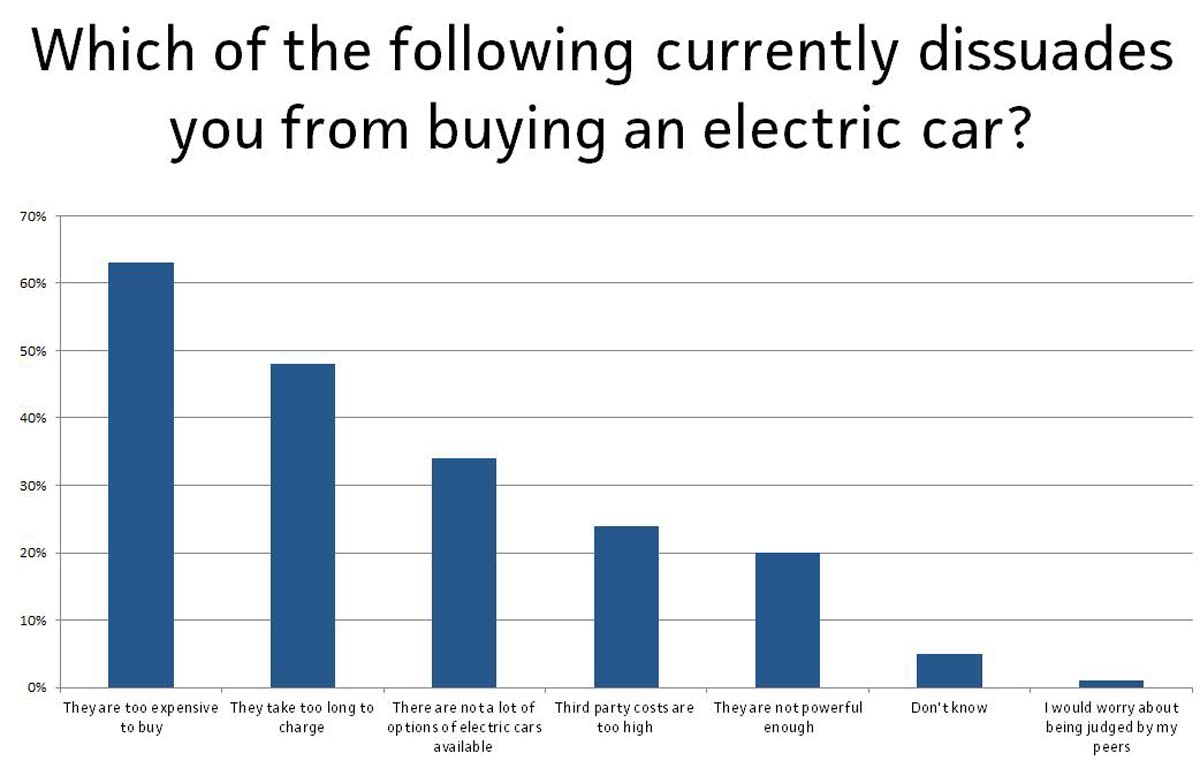 Compare your next car

If you’re thinking of switching your car to a more eco-friendly model, we’re here to help. As part of our eco-conscious campaign, we’ve created a eco-friendly car comparison tool which uses data on car emissions and fuel efficiency to compare cars, and show you which models are best for the environment, and best for you. Take a look.