A land of unending fascination, Japan is one of the best countries to visit on Earth. With such a wealth of diversity, you’ll want to go back again and again. And again.

Japan is unlike anywhere else on the planet. Wherever you go, you’re guaranteed complete cultural immersion, utter fascination, and lovely people. Whether you’re looking for sensory overload or total serenity, you’re in for an absolute treat. Everywhere you look, you’ll see something either beautiful, captivating or kawaii - almost impossibly cute.

Welcome to the Land of the Rising Sun. Let’s dip into some of Japan’s highlights, season by season.

Japan in the spring 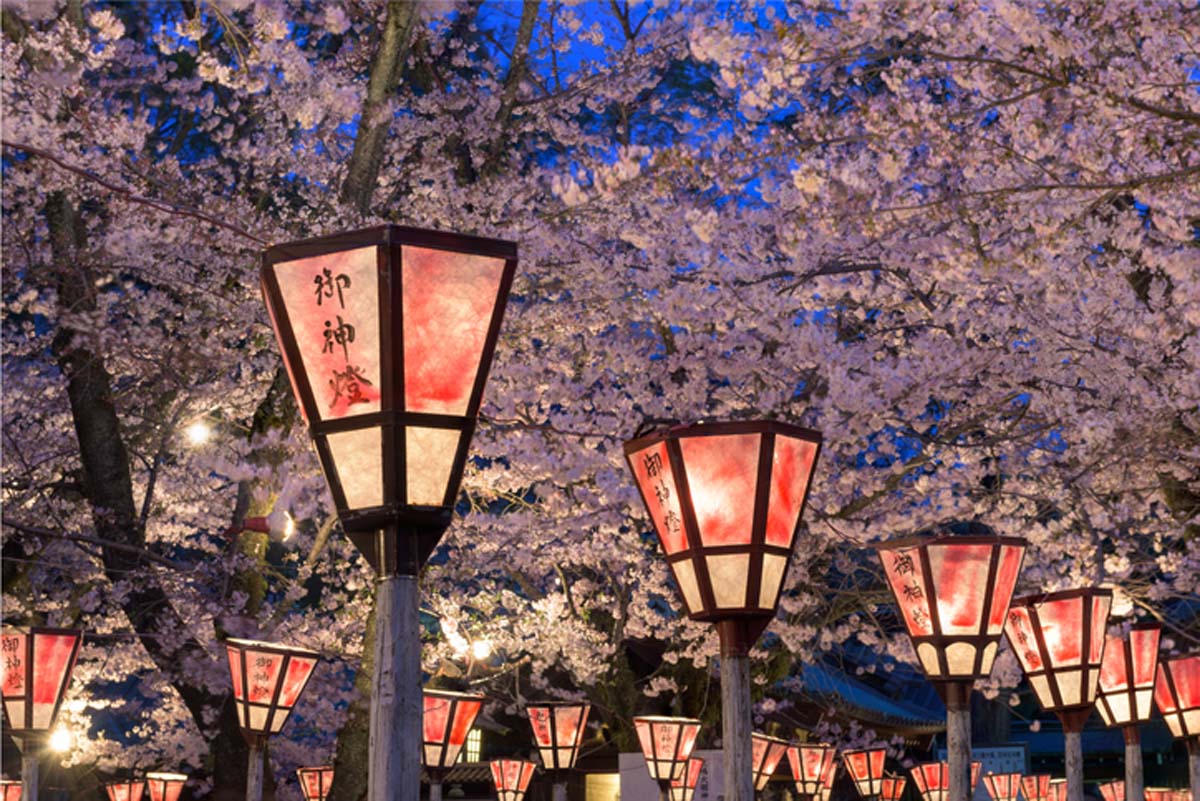 The swoonsome cherry blossom (sakura) season is the big one in Japan. Essentially the cherry blossoms sweep across the country like a pink wave, beginning as early as January in the southernmost points, and reaching the northernmost points by May. Early April is usually the time to see them in the major cities such as Tokyo, Kyoto and Osaka.

Keep an eye out for parties specifically to view the flowers (hanami). Grab a beer and a bento box, lay on a mat, gaze upwards and sigh deeply at the blushing flecks of happiness.

Eating cherry blossoms is also a thing. Various types of food and drink are flavoured with the blossoms and leaves. They can also be salted and pickled in plum vinegar, then used in all sorts - from teas to sweets. You can eat them straight from the jar too, although they’re pretty salty.

One thing we will say about the peak of spring is that the locals are fully aware of it. The nicest part of spring - usually late April to early May - is a national holiday called Golden Week. Expect everywhere to be busy, traffic to be bananas, and prices to rise accordingly. 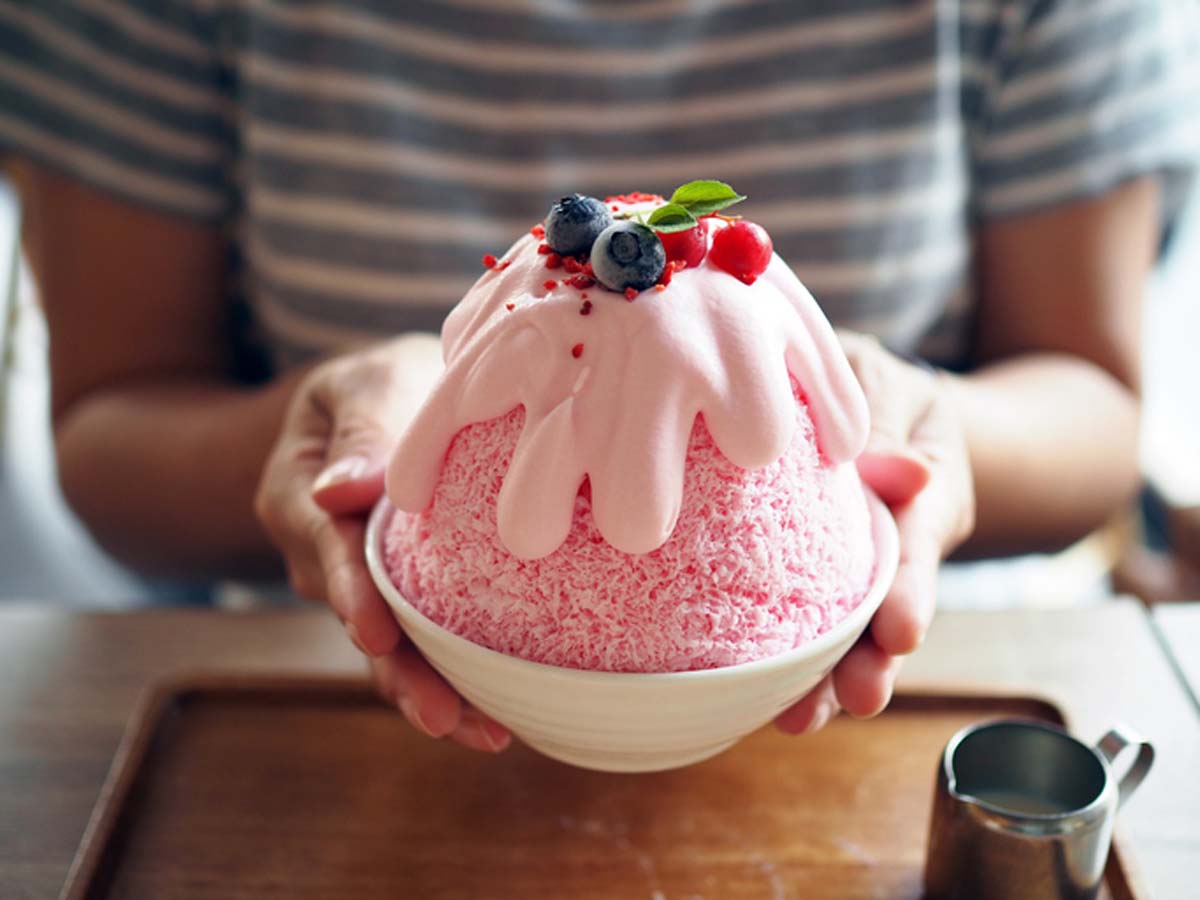 It’s festival season! A summer festival (natsumatsuri) in Japan is not be missed, with dazzling arrays of street performances, food vendors and fireworks.

If you’re in Tokyo, then the Sumidagawa Fireworks Festival is absolutely banging. It’s also the world’s oldest fireworks display. The sparks take place over the Sumida river near Asakusa, but it’s super popular, so might demand a bit of forward-planning.

Restaurants book up and charge a premium, so now might be a good time to stock up in a 7-Eleven before pitching a spot (more on this shortly).

And of course this year (2020) the Summer Olympics are being held in Tokyo from 24 July to 9 August so expect the already busy capital to be even more buzzing if you're there at the same time.

For authenticity, the Gion Festival in Kyoto has its origins in the 9th Century. It takes place over July in its entirety, but 17 and 24 July are the big days. Both of these days see the Yamaboko Parade, featuring processions of massive yet intricately designed wooden floats - many of which are built from scratch in the same year.

The festival is comparatively sedate, although the three days leading up to each procession are huge street parties (yoiyama). These are the best times to see locals dressed in traditional summer kimonos (yukata), sample the street food… And let your hair down, frankly.

Summer in Japan is really humid. Beer gardens also come alive in summer for those wishing to cool off with a frosty one. But as responsible travel pals, we have to remind you to stay hydrated, and have regular water breaks!

For cooling off food-wise, udon and soba can be eaten cold with dipping sauces. There’s plenty of skewered fresh fruit available. We also recommend kakigōri, which is a dessert made of ice shavings, usually flavoured with syrup, and sometimes condensed milk. As you’d expect in Japan, these are seldom dollops of slush in a cup - they’re often works of art in themselves.

Japan is all about the leaves being in flame. Heading out to the forests and watching the world change colour is striking anywhere, but doubly so in Japan.

Even if you’re city-bound, Japan’s metropolitan areas are replete with great parks. Tokyo’s Shinjuku Gyoen is lovely any time of year, with a variety of different gardens inspired by different parts of the world… But it’s especially breathtaking in the autumn. There’s a small entrance fee, but we’d gladly pay it twice.

Autumn is also the season for food festivals. You’ll be particularly spoilt if you’re in the capital. September sees the Tokyo Wagyu Show in Chiyoda, which is well work staking out. Then late October to early November brings an 11-day ramen festival in Komazawa Olympic Park. And guess what, noodle fans? Entrance is free!

And the Hokkaido Food Festival showcases the best that the northern gourmet prefecture has to offer over the course of four days. It’s held in Yoyogi Park, and is scheduled for Friday 4 October to Monday 7 October in 2019, but check beforehand just to be sure. Our hot tip is to go on the Sunday. That way you can hopefully catch the rockabilly dancers who gather to shake their thang at around two o’clock in the afternoon, at one of the south entrances. If you love leather-clad gangs busting some serious moves, this one’s essential.

Japan in the winter 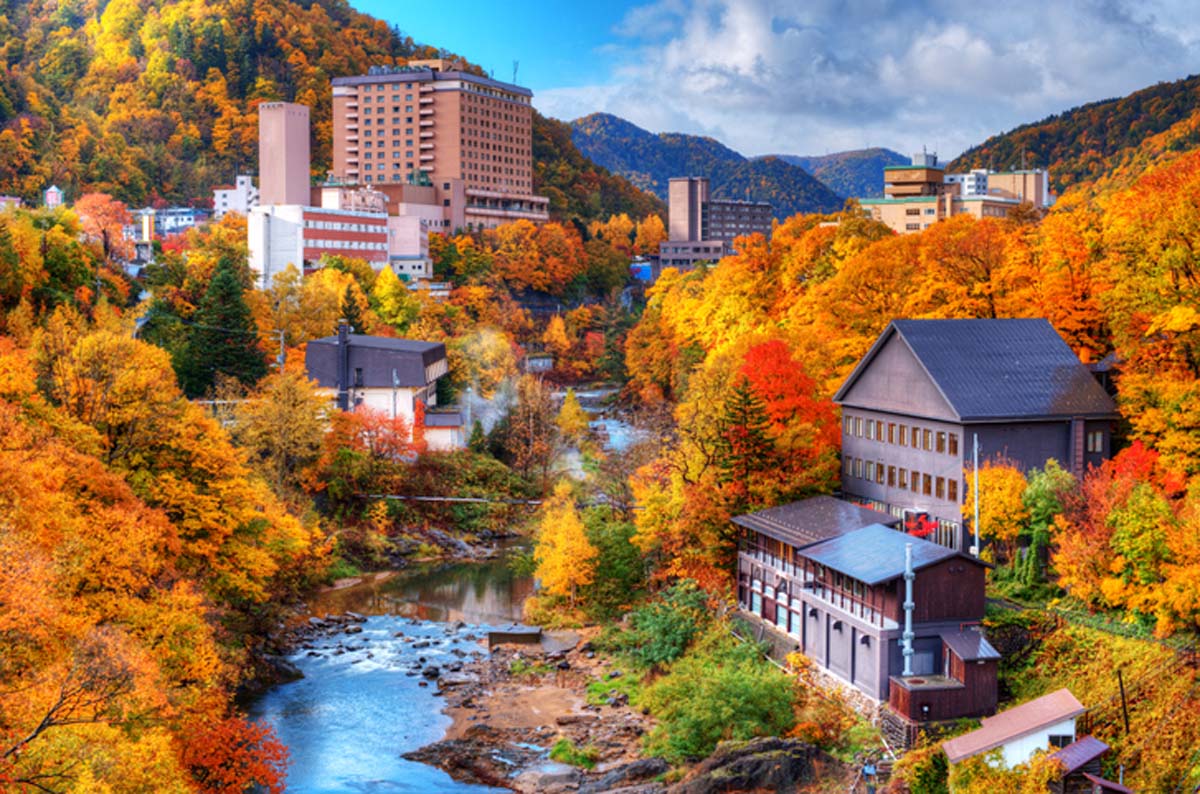 To fully embrace winter, why not head up to Japan’s northernmost prefecture, Hokkaido. A magical snowscape awaits!

Home to over a third of the prefecture’s population, Sapporo is the springboard into Hokkaido. It also plays host to a spectacular snow festival - Sapporo Yuki Matsuri - usually for around a week in the first half of February. Here you can see massive works of art sculpted from ice and snow, and have a go on some epic snow slides. You heard right - snow slides!

The icy cold of winter is also the best time to experience the onsen, Japan’s natural hot springs. The ideal way to warm up after a jaunt in the snow (well, tied with a nice hot sake), there are indoor and outdoor onsen dotted all over the place. Our top tip is to stay in a ryokan - a traditional inn - with an onsen onsite. Although be warned - you may have to go in the buff.

If you’re based in the island’s capital, the Jozankei Onsen is under an hour from central Sapporo, and has around 50 hot spring sources. It’s set in a lovely valley, which is also a great spot for dazzling autumn colours. But autumn was so last season - get over it!

And we can’t really talk about the island without mentioning the ski. Japan’s wilderness is a haven for powder-lovers. The largest resort is Rusutsu, accessible from Sapporo, and has 42km of slopes ranging across all abilities, with loads of ungroomed, tree-lined runs. Equipment hire is comparatively cheap. Sugoi!

If you’re planning on hitting the slopes, make sure you add our Winter Sports Upgrade to your Admiral Travel Insurance to make sure your snow holiday is properly covered.

Five things to do in Japan all-year round 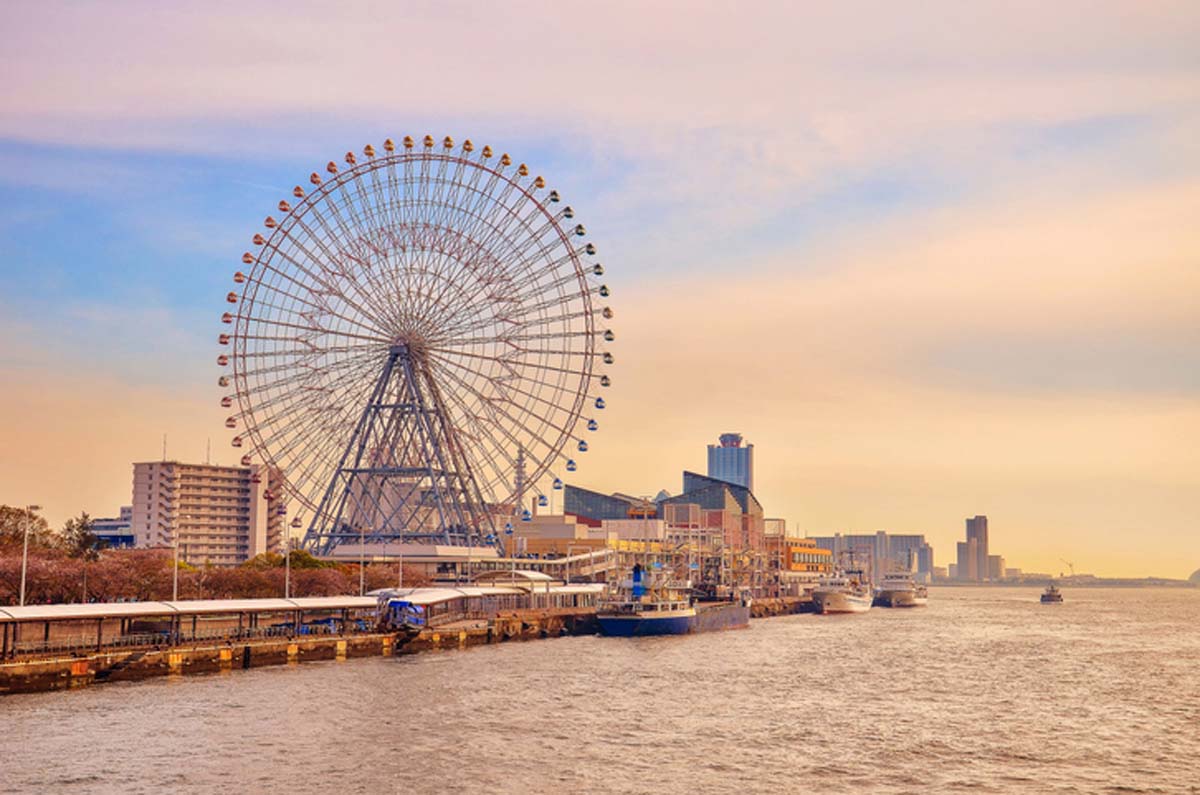 We couldn’t hope to squeeze everything there is to do in Japan here, but here are some of our highlights:

Customs to be aware of in Japan

Prepare to be royally spoilt. Japanese food is varied, delicious, and needn’t cost a fortune. It’s possible to get a serviceable meal in a 7-Eleven, and any snacks you buy to tide you over (such as onigiri - more on that in a mo) are likely to be so gorgeous that they make you gasp. Some of the cuisine will require you to be adventurous. But you don’t come to Japan if you’re not seeking adventure, right?

A handful of Japanese words and phrases worth knowing 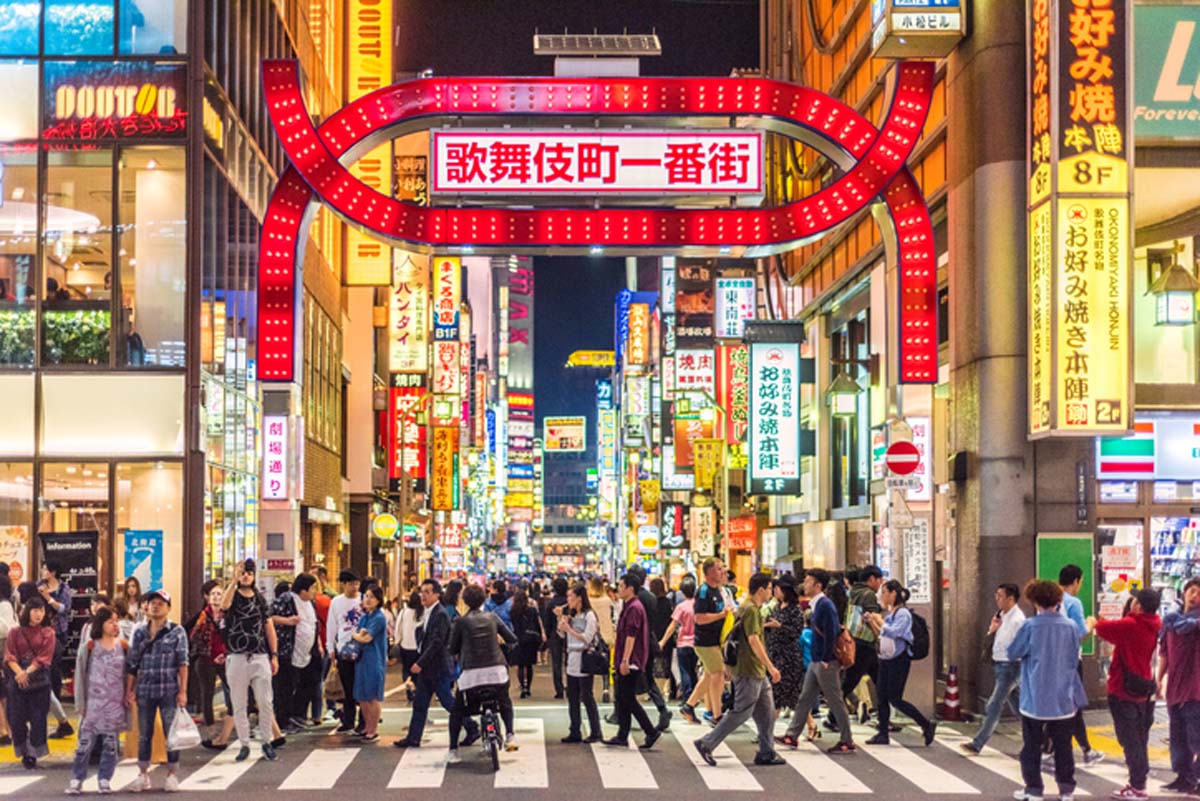 Worldwide travel insurance will cover your holiday to Japan. With Admiral, you can choose Single Trip cover – perfect if Japan is your only holiday this year (and what a holiday it’ll be!). But if you’re going on more than one holiday in a year, you may find an annual policy better suits as it covers an unlimited number of trips.

Whichever you choose, you’ll be covered for:

A traveller’s guide to China