Stricter rules for diesel car emissions and new areas for testing are all being incorporated into the updated MOT test for England, Scotland and Wales.

The first change is the way defects are categorised; going forward they will be classes as Dangerous, Major or Minor.

The category the MOT tester gives each issue will depend on the type of problem and how severe it is - a dangerous or major mark will result in your car failing the test.

What do the new defect categories mean?

A direct and immediate risk to road safety or has a serious impact on the environment do not drive the vehicle until it’s been repaired. FAIL the MOT

It may affect the vehicle’s safety and put other road users at risk or have an impact on the environment – repair immediately. FAIL the MOT

No significant effect on the safety of the vehicle or impact on the environment, repair as soon as possible. PASS the MOT

Garages will still give ‘advisories’ on your test certificate which cover areas you need to monitor and potentially will need repairing in the future. Your car will pass its MOT test with advisories.

Perhaps unsurprisingly, the MOT test is clamping down on diesel emissions and is introducing stricter limits for emissions from cars with a diesel particulate filter (DPF).

The DPF captures and stores exhaust soot to reduce emissions from diesel cars. In the new test, your car will get a major fault (resulting in a fail) if you can see smoke of any colour coming from the exhaust or if the garage finds evidence the DPF has been tampered with.

New items being tested in the MOT

Seven new things are being added to the May 2018 overhaul, with the following items being checked:

MOT exemption for cars over the 40-year mark

Cars, vans, motorcycles and other light passenger vehicles won’t need an MOT if they’re over 40-years-old and haven’t undergone any substantial changes. Currently, only vehicles first built before 1960 are exempt from needing an MOT.

When the rules change in May, vehicles won’t need an MOT from the 40th anniversary of when they were registered. You can check the date the vehicle was registered online.

Each time you tax your classic (even if you don’t pay anything) you will need to declare it meets the rules for MOT exemption. 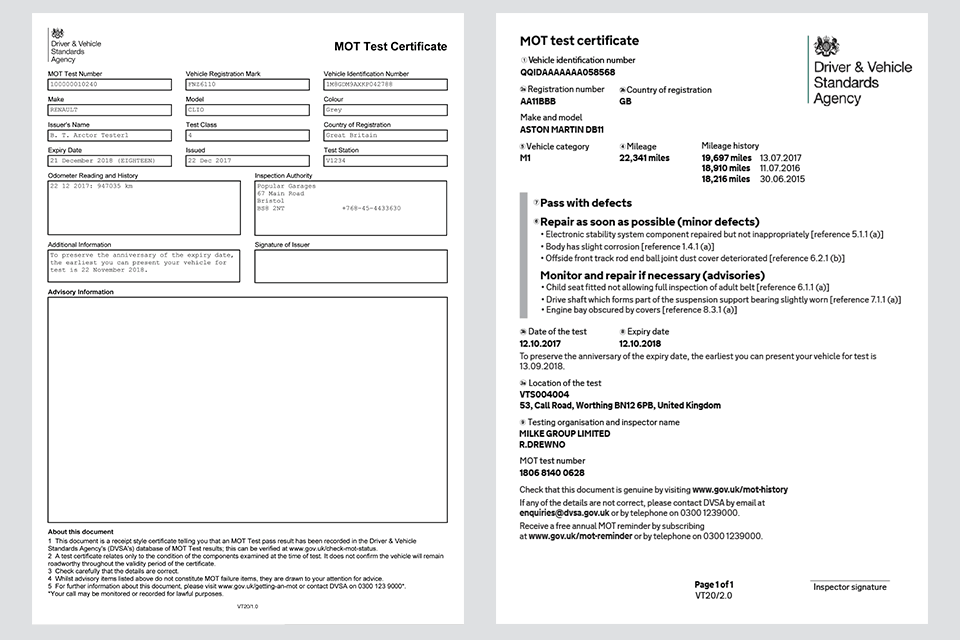 With the new test comes a redesign of the actual certificate; the new one will list any defects under the new Dangerous, Major and Minor categories

None of the changes being introduced will affect the cost of an MOT and the maximum fees a centre can charge remain the same - £54.85 for a car and £29.65 for a standard motorbike.