In the UK, 264,933 cats are reportedly missing. That equates to 184 every minute or three every second.1

With 55% of owners stating that their feline friend has gone missing from home at some point, it’s clear: lost cats are an issue for pet owners.

Finding a lost cat is difficult; they like to wander, and different types of cats explore more than others.

Below, we discuss what causes cats to wander from home, where cats go and what cats are most likely to vanish.

We even delve into heat map and survey data to show where cats like to disappear to and share findings about the secret life of kitties.

What causes cats to go missing?

According to our research, the most common circumstances include:

Changes to the home appear to scare cats off, with 19% of missing cat cases happening during a home move.

However, these aren’t the only reasons they may leave; they like to explore for food and attention, with more than half (53%) of Brits confessing they’d feed a cat they didn’t know if it visited their home.

We have good news though: 41% of people who reported a cat missing had them turn up again of their own accord.

Owners love reuniting with their cat, but when they return they have one burning question: “where did my cat go?”

Where do cats go?

18% of owners found their lost cat near their home, while 16% received a call from someone in the area.

However, we wanted to figure out exactly where cats go wandering. We partnered with Tractive GPS pet tracker to explore what cats get up to and where they go when their owners aren’t watching.

We found interesting differences between three key groups: male and females, rural and urban and young and old.

The GPS data revealed that males were 60% more active on average than females, which is likely why they make up 61% of lost cats in the UK.

“Male cats are naturally more active and maintain wider territory than females due to their innate drive to find mating opportunities. The more ground they cover, the more females they are likely to encounter. This is less of a concern for females as they are not always in season.

“Neutering removes much of the motivation to mate. However, some differences in activity and territory size between males and females remain.”

Due to their increased activity levels, male cats burn, on average, 19% more calories than female cats.

This trend appeared across male cats, with the youngest logging the highest average minutes per day out of the 12 cats in the experiment.

One of the cats is known as a local celebrity thanks to his busy social calendar visiting nearby residents.

His GPS data tracked him burning exactly 315 - 330 calories for his daily routine. 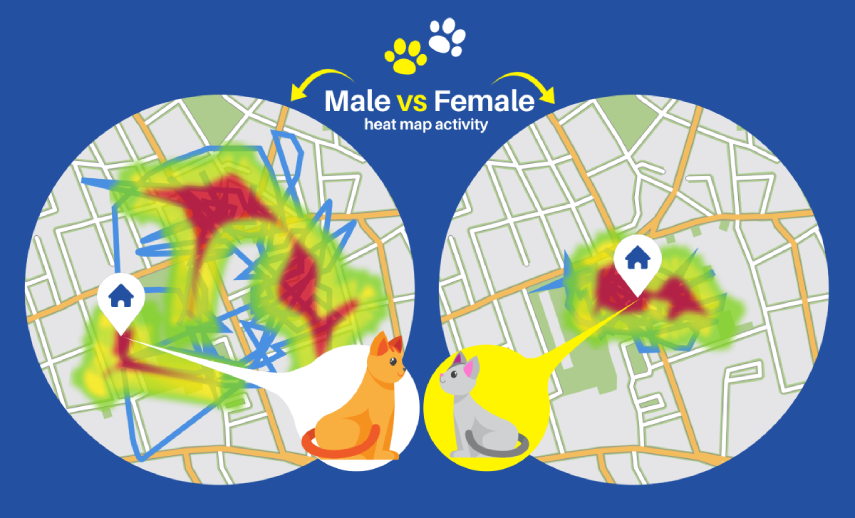 On average, a female cat sleeps 28% more than males.

If you’re looking for a cat that will spend most of the day snuggled up on the sofa with you, then a female might be the better choice. 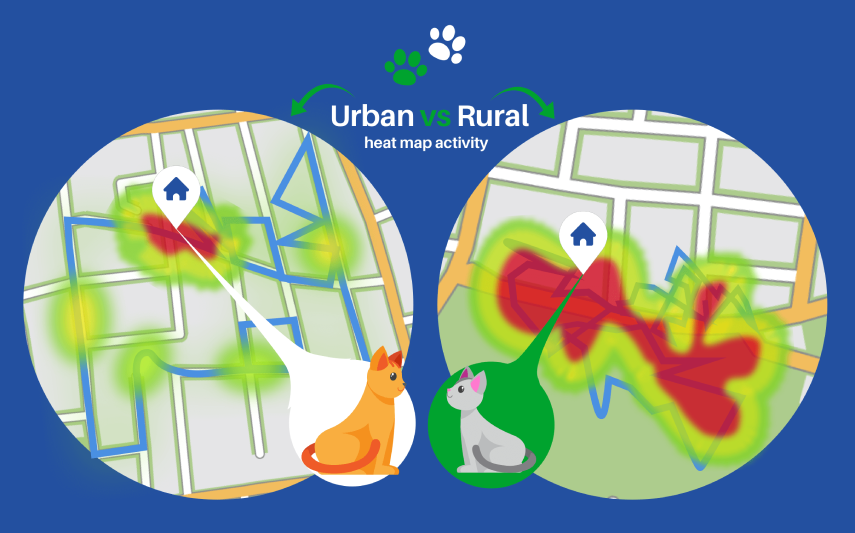 When comparing rural and urban cats, daily active time was the same on average, which suggests they travel similar distances.

However, roads are more dangerous for cats living in urban areas.

As seen in the map below, urban cats use the same routes to explore nearby green spaces and cross more roads:

“All residents in an urban area should be mindful of the cats living in the area, even if they don’t have cats themselves. Checking for cats before closing sheds or garages, securing water butts and ensuring fences are in good repair will all help keep cats safe.

Rural areas are generally safe, but you should consider predators and environmental hazards in the local area. Keeping cats inside at night and using quick-release collars is recommended for rural and urban cats.” 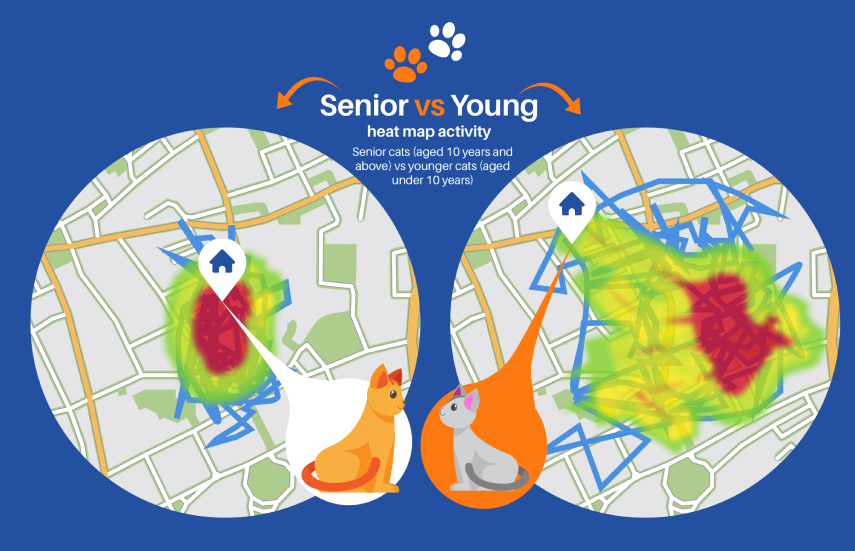 Older cats (aged 10 years or above) spent 10% less time being active than their younger counterparts.

Cats over 10 years old also burned 4% fewer calories than younger cats in the experiment, as expected.

As cats age, they spend more time in a calm state; on average, the data showed 214 minutes per day for cats over 10 years old.

“As the cat is a prey species as well as a predator, to openly display signs of pain or discomfort makes them vulnerable. As such, any aches and pains they may be experiencing as they age are hidden and often go unnoticed by owners.

“Most cats over 10 will be experiencing some degree of osteoarthritis and will prefer to spend more time sleeping and less time exploring their territory. Older cats should have regular veterinary checkups to ensure they are in good health and warm, comfortable beds can help them rest happily.”

How long do cats go missing for?

Most respondents (34%) reported their cats to be missing for between two and seven days.

6% of respondents had a cat disappear for more than three months, while 8% sadly had a cat never return. 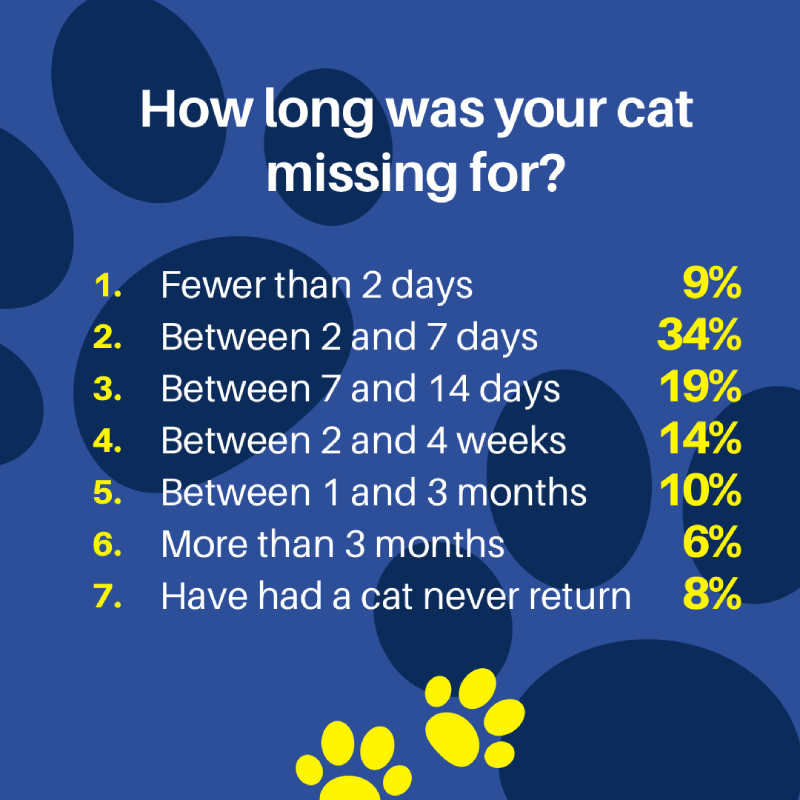 Which cats are most likely to go missing?

The National Pet Register classifies over 11,000 cats as “missing”, with the vast majority (42%) being domestic short-haired.

Missing cats of this breed were 240% more common than the next most common breed.

Black cats are missing the most. Over 85,000 black cats are currently at large, making up 33% of the total lost cat population.

72% of the cats reported missing had monotone coats, which suggests ones with easily identifiable markers are reunited with their owners sooner.

What to do if your cat goes missing

We have previously discussed what to do if your pet goes missing.

In December 2021, the British government announced a new law that requires cat owners to get their pets microchipped.

Pritpal Powar, Head of Pet at Admiral Insurance, discussed the importance of microchipping:

“It’s important to ensure your cat is microchipped as it’s a great way to help missing cats be reunited with their owners.

“Microchipping is a safe, simple procedure for animals and the microchip lasts a lifetime, but remember to update the information if you change address.”

If you have a lost cat, we can help you build a missing poster quickly:

Give your cat or dog the cover they deserve

1The data gathered originates from the National Pet Register, Pets Located, Pets Reunited, Animal Search and the Blue Cross, where collectively there are 264,933 cats listed as missing.